On a fall evening when the leaves were turning in Canada, I was getting my bare ass slapped by a woman with a mustache in Istanbul. 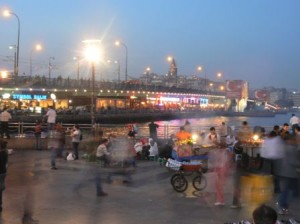 Fresh from 72 days of bike-touring, where five friends and I had cycled from Paris to Istanbul, a Turkish bath seemed like a great idea.

The owner of my hostel divulged the location of a non-touristy bath in the area. His directions led through secret streets and eventually to the building itself, which looked seedy and unimpressive. I thought about leaving but was committed by curiosity and walked in.

An old woman with attached eyebrows approached and showed me to a changing area, where some well-worn flip-flops and a tattered towel awaited.

In the main bathing area, steamy shafts of light came through cracks in the steeple above. The room was muggy and claustrophobic with its wetness. A steady dripping came from the urinal-like urns mounted to the walls. The old woman turned and revealed a beard, which reminded me of burned trees in a sparse forest. She suddenly barked “VASH!” and gestured to the urns then left. 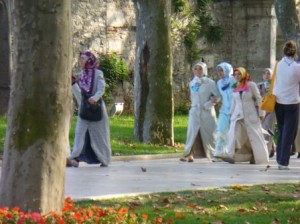 I took a plastic bowl from beside the urn and began to splash water over myself assuming this was what VASH! meant. A good ten minutes passed. I modestly tried to cover myself with my hands while watching a local woman across the room. She seemed to be overly enjoying herself and hardly noticed me until, unsure about what to do next, I headed for the door. She looked up and said, “Finish?”

Sparsely wrapped in the thin towel I went back out into the foyer, feeling the flip-flops flicking grit up my legs.

There was a shocked murmuring in the foyer when I emerged. The old lady waddled over and more or less pushed me back into the bath room growling, “VASH!”

Maybe this was a Turkish prison…

Back in the wash room, I splashed bowl after bowl of water over myself, feeling utterly uncomfortable.

Finally, the old lady came in but I wasn’t relieved. She was naked, except for a black pair of bikini underwear.

Please don’t be my massage lady!

She summoned me by slapping her hand on a giant slab of marble and aggressively forced me down onto my back beginning a vigorous rub-down with a sponge that looked like a wire pot-scrubbing pad.

With a martial arts-like manuver, I was suddenly flipped over and positioned face-down on the watery marble.

Another vigorous rub-down and a slap—this time on the ass. What was with all the slapping? Did people normally drift off in pleasure around here?

I returned to VASH! sitting where others and their ‘parts’ had sat before. I thought of how quickly I might get a proper shower before diseases started to settle in.

A familiar slap on the marble—my cue.

I went over and was relieved to see a bar of soap. The old lady went hard at scrubbing my arms, and I watched embarrassed as my limp hands slapped against her long, sagging breasts while she worked. Averting my attention, I was astonished to see gloppy gray balls of dead skin all over my arms. Disgusting! But somehow fascinating…

There was so much lather now that her attempts to VASH! me were akin to using bare hands to catch a fish. I reached a breaking point though and laughed in great, gulping sobs. She slapped my ass, VASH!

There was a shampoo session next: my face between her breasts as she scrubbed my scalp. I couldn’t breathe until she pulled my head back and, with a resounding shhhlock, the seal was broken and air filled my lungs. 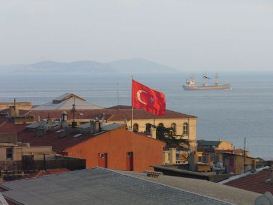 Then—by the grace of God—it was over. In the changing room, I crawled raw and stinging into my clothes, which felt like sandpaper. At the cash, register the woman came over sporting a smile around her hairy mouth. Hovering at my shoulders, she gestured to my wallet. I was still coherent enough to understand it to mean that I should give her a tip. I did, because I was terrified of what torture she reserves for non-tippers…

Heather Lea is the  Owner and Creative Director of Riding Full Circle.

One Response to :
Just Another Travel Oops